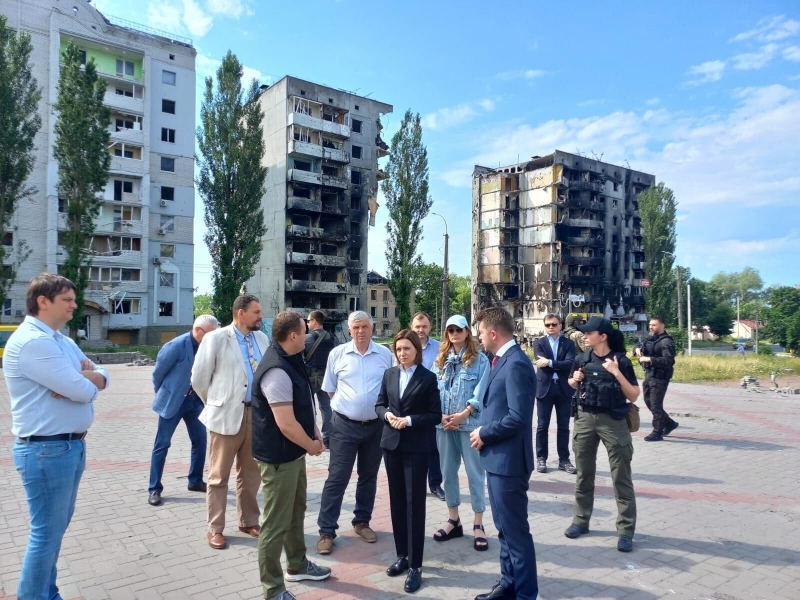 The President of the Republic of Moldova Maia Sandu is on a working visit to Ukraine today at the invitation of President Volodymyr Zelenskyy. In the first part of the day, the Head of State visited several cities in the Kyiv region, which were severely affected by the war.

"I saw with my own eyes houses burned to the ground, residential blocks destroyed by rockets, hospitals, shops and kindergartens ruined by Russian artillery attacks in Borodyanka and Irpin. We also saw the site of mass graves in Bucha, where dozens of people shot during the occupation of this small town by the Russian army were buried. It is a tragedy that is hard to express," President Maia Sandu said after visiting the three Ukrainian localities. She also mentioned that the Republic of Moldova condemned the military aggression of the Russian Federation against Ukraine from the first day and called on the international community to do everything to restore peace, to investigate and punish the unjustified crimes committed in this conflict.

"Ukraine, our neighbour and friend, has been living with the war for four months. We stand with the brave Ukrainian people who are fighting for their freedom and for the freedom of Europe. Ukraine's future is in the free world, in the great European family", President Maia Sandu said during her visit to Ukraine.