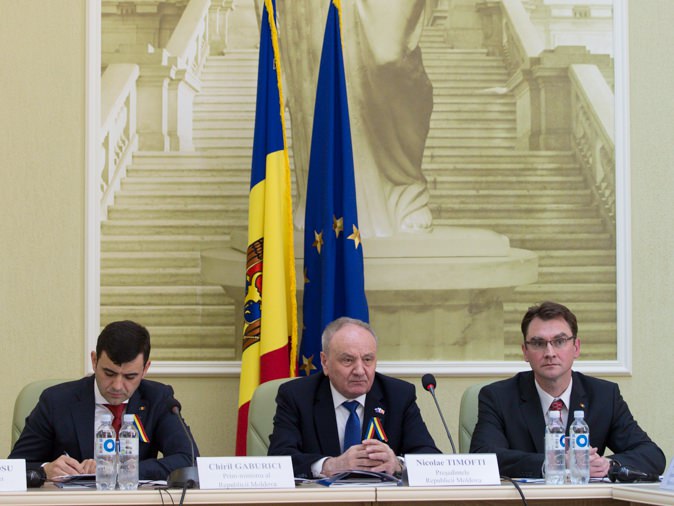 President Nicolae Timofti participated in a meeting of the National Council for Law-enforcement Bodies Reform.

In his speech, Nicolae Timofti said that the reform of the judicial system represented a premise necessary for enhancing the rule of law state and commitments regarding justice were included in the Association Agreement concluded with the European Union.

Timofti highlighted that preventing and fighting corruption had to continue to be a constant concern of the state’s authorities:

„I welcome the decision of the Constitutional Court of 16 April 2015, which recognised constitutional the standards that regulate the expanding confiscation and illegal enrichment.

The fostering of institutional capacities of the National Integrity Centre is also important. The Justice Ministry has worked out a set of laws, by which it is meant to strengthen the mechanism to check declarations on incomes and property, declarations of personal interests, control the observance of legal provisions on conflict of interest and regime of incompatibility imposed to more public servants.

After amending the concept on judges’ immunity, there followed cases when judges are hold criminally liable in general order. It is a step towards improving the judicial system.

The new mechanism to assess the performances of judges show to be efficient and truthfully mirrors  the way a judge works from quantitative and qualitative viewpoint, as well as from the point of view of professional ethics and reputation. I regret that the mechanism of selecting judges was planned to be a clear and transparent one, but became a confusing one,” Nicolae Timofti said.

Timofti said that the prosecution had to consolidate its independence and professionalism. „The draft law on prosecution distinguishes out from the set of laws which have not been adopted yet. Being given positive notice by the Venice Commission, this bill is a priority,” Timofti said.

Nicolae Timofti made some proposals on justice reform.

The rehabilitation of victims of offences is still waiting for its regulation and, on this occasion, I ask the responsible authorities for maximally involve in giving final touches to this extremely necessary law,” Timofti said.

Prime Minister Chiril Gaburici proposed to be created a single centre to reform law-enforcement bodies, which would serve as platform to analyse, coordinate, work out policies and laws, and would supervise the activity of institutions in charge of justice reform.

Justice Minister Vladimir Grosu presented a report on implementation of the Justice Reform Strategy for 2014, which found a certain achievement of planned actions in proportion of 69 per cent. Grosu highlighted that, over 145 magistrates (1/3 of the total number) had left the system since 2011, and a new generation of judges substituted them. At the same time, magistrates do not enjoy immunity anymore – they risk criminal cases and extending confiscation of wealth, if suspected of corruption, illegal enrichment or other breaches. Besides, in 2014, for the first time ever more judges were sentenced to prison for corruption.

For his part, Head of EU Delegation to Moldova Pirkka Tapiola stressed conditions that the Moldovan authorities should observe in order to receive the next instalments within the assistance provided by EU, in total amount of 60 million euros meant for justice reform.

Attending the meeting were members of the mentioned council, representatives of development partners of Moldova and civil society.